Wasps are simply frightening and for a good reason. They set up nests around the house and they become a lurking danger due to their painful stings when they feel threatened. Unlike bees, wasps can sting repeatedly and also in packs and such attacks can become fatal. There are over 30,000 wasp species, and all of them are dangerous.

Here, you’ll learn how to get rid of wasps through different strategies, including traps, sprays, wasp repellents, and homemade wasp killers.

The most Effective Methods for Getting rid of Wasps in 2020

Wasps are highly sensitive and when trying to get rid of these pests, you’ve to be cautious. This wasp trap is popular with buyers due to its ease of use and simple design. The Aspectek Wasp Trap is a highly effective outdoor solution to kill wasps, fruit flies, yellow jackets, and other harmful flying pests.

It features a round pumpkin-like globe with holes on the bottom section where the wasps will go through. Inside, there’s an interior cone into the clear yellow catch chamber where the wasp becomes entrapped and can’t fly out. It is easy to use as you only need to fill any lure by opening the top lid.

The lure will attract the pests to their death. You can hang it anywhere on your compound using the nylon cord provided. From the porch, gardens to your yard or any other area you wish to protect from wasps. This is one of the best wasp traps because the fruit-like appearance attracts wasps and other insects.

The twist-on lid makes it easier to place your bait, clean up the trap, and empty it. This reusable design is more cost-effective compared to other single-use traps to get rid of wasp.

Preventive measures are preferable when dealing with deadly wasps. This is why this wasp repellent has become so popular with homeowners. It is an eco-friendly decoy repellent that plays into wasps’ behavior. These pests are territorial and, as such, avoid building new nests where others exist within a 200 feet radius.

FMI Brands Inc. Original Get Lost Wasp looks like an exact wasp nest. This means any wasps coming close to your home will avoid nesting here to avoid fights for territory. It is a natural and eco-friendly way to get rid of wasp from your property. These decoys are weather-resistant and are made from a sturdy cotton and bamboo fiber blend.

Before hanging these simulated wasp nests, you should inspect and remove any old natural nests from the area. If you are looking for a chemical-free way to get rid of wasps from your property, you have the answer in these hanging wasp deterrents. They are easy to use and deploy, and they help keep your family and pets safe. 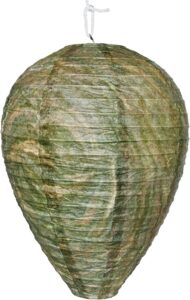 When you have a wasp infestation on your property, you need a quick and effective wasp killer. The Ortho Home Defense Hornet & Wasp Killer7 makes it to the list of the most effective ways to get rid of wasps due to its instant action. This best wasp spray offers a fast-acting solution to kill wasps, yellow jackets, mud daubers, and hornets. The entrapping foam deactivates the pests instantly and also kills any wasps that might return to the nest, therefor it is a good way to get rid of wasp.

It is easy to use wasp spray with a jet spray that reaches wasp nests up to 20 feet about the ground. This ensures you stay safe when using the spray and allows you to reach any nests away from reach.

It is best if you want to apply for smaller areas around the house. For instance, if you notice a nest near windows or doorways, this is the best solution to remove the danger.

Getting rid of wasps is costly, frustrating, and dangerous. However, you don’t have to buy expensive commercial products to remove wasps. You can make a cheap and affordable homemade wasp killer by:

Like most insects, wasps have a natural aversion to peppermint. This makes it a simple way to get rid of these pests.

White vinegar is another effective wasp killer. To apply this homemade remedy, mix a cup of white vinegar with a cup of water. Use a spray bottle to spray at stray wasps and nests to any adult and baby wasp.

Soap kills wasps by dissolving the wasps’ outer, protective coating. It also inhibits their ability to fly, and the pest drowns faster than when you use clear water.  The soap also suffocates them over time. You can use a hose-end sprayer filled with hot water and dish soap to spray on a nest. Make sure you keep your distance to avoid getting stung.

What Kind Of Spray Will Help to Get Rid of Wasp?

Peppermint oil spray is the most effective spray to deal with wasps. Wasps don’t like the smell of peppermint and this acts both as a repellent and it can also kill them. Mix some peppermint oil with water and spray on any wasps or nests around your compound.

How to Prevent Wasps

Wasps nest around homes in search of sweet food and drinks. Due to the danger, they pose with their stingers, it’s advisable to present their infestation instead of trying to get rid of them. Here are some easy ways to prevent wasps:

Quick Guide How to Get Rid of Carpenter Bees

Eye-Opening Guide How to Get Rid of Wasp Easily

Incredibly Easy Methods to Get Rid of Stink Bugs